What kind of person thinks that is perfectly acceptable to mercilessly murder wild and majestic animals such as giraffes and zebras? Well, you’re about to meet one. This is Aryanna Gourdin. Despite being just 12 years old, Gourdin is already a serial trophy hunter. She travels throughout the world, hunting and poaching some of the most beautiful, not to say endangered, species on our planet. Not only that, she proudly photographs herself posing next to these defenceless creatures, and posts the images on to Facebook. 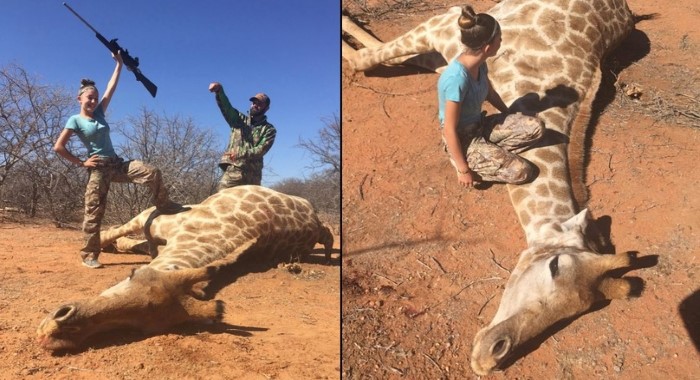 Despite the utter wickedness of her actions, Gourdin is completely unapologetic:

“I’m a hunter and no matter what people say to me I’m never going to stop. It’s something that I cherish and I enjoy and I want other people to see what I’ve been able to ­experience. I want other women and youth to get into the hunting experiences. It’s just awesome. We love animals, too. It’s just, we also love hunting. I would never back down from hunting.”

You read that correctly, she claims to “love animals.” Animals that she innocently guns down for her own amusement. She also thinks that her actions were also perfectly acceptable because some of these animals are old!

But it is no laughing matter. Masha Kalinina, an International Trade Policy Specialist, said:

“Trophy hunting is cruel and does nothing to support conservation in Africa. Humanity and compassion is the kindest example we can set for the next generation. Trophy hunting is short-term financial gain for long-term loss, not just for the animal kingdom but also because killing off charismatic species deprives local economies of ecotourism ­opportunities.”

Despite the backlash, Gourdin shows no sign of stopping what she’s doing. She says that she will “never apologise for being a hunter.”

She should be ashamed of herself.