Now he might look like an intellectual kind of guy, but appearances can be deceiving. On Monday morning, Jeff Waters of Jacksonville, Florida, walked into a Bank of America with a check to cash. Nothing entirely out of the ordinary about that, right? Well, no. But things get plenty weird and pretty quickly. It’s all about the numbers, you see…

In the ’90s, Waters bought a blank U.S. Bank of Idaho check off a homeless man named Tito for 100 bucks. He bided his time (we’ve not idea why he waited so long) and finally decided to strike this week. He filled in the amount and confidently strode up to the counter. The amount he tried to cash? $368 BILLION DOLLARS! 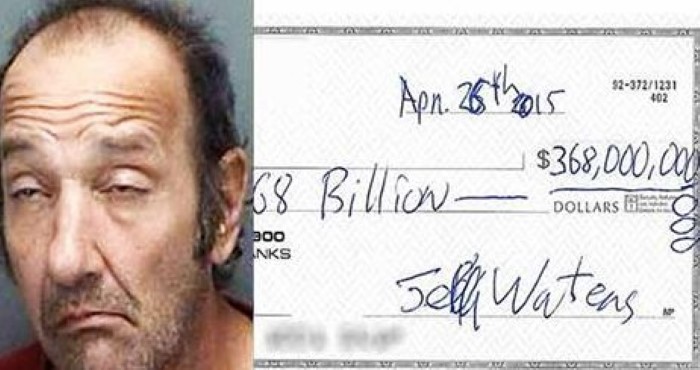 “It’s always been my dream to own the best Italian restaurant in the earth,” Waters told police. “I’m 10% Italian. Cooking authentic Italian food is in my blood. I had planned to make the restaurant 80 million sq. feet and able to accommodated 30 million eaters at once, plus it was gonna be totally underwater so people could look at sharks while they ate. But the bank wouldn’t give me my money they owed me. Tito said the check was good for any amount I wanted to write it for. So blame Tito, not me. I’m as innocent as a schoolgirl.”

Sounds like one Helluva dining experience he had planned! Shame it didn’t work, eh?

Not only did he get in trouble with the cops for forgery, Waters was additionally charged with unlawfully carrying Chinese throwing stars (oh yeah!) and possessing bath salts (but not for enjoying nice long hot baths with, we assume).  A weird, weird – but ambitious – guy.