We all know that dolphins are clever cookies. But did you know that they were this clever?!

Diver Keller Laros was leading a group of divers on a tour of the waters off of Kona, Hawaii, when something completely unexpected happened. “All of a sudden I heard a loud squeak, and I turned around, and [a] dolphin was literally three feet behind me,” Keller said. “He swam right up to me.”

Keller noticed that there was something not quite right about the creature – it was alone. “We’ve seen five of those dolphins at this dive site at the night dive before. They’re very curious and intelligent animals,” he said. “Dolphins are really social animals. In the past we’ve seen at least two [at this site].” So when he noticed a sole dolphin swimming among the manta rays, Keller knew something was up.

Then, the dolphin signaled Keller over. The reason? Watch the video to find out… 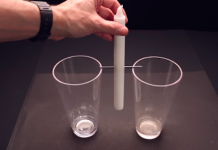 He Rests A Candle Between Two Glasses. What Happens Next Is Amazing! 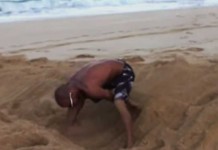 He Digs A Hole In The Sand. When The Waves Hit? Everyone Stares In Disbelief