I have yet to meet a traveler that doesn’t have an African safari on their list of ‘to-dos’ in the world. Australian Photographer, Bobby-Jo Clow, was on safari in Tanzania when she had an up-close encounter with a pair of baby Cheetahs. The idea of an opportunity to experience the wild up close is so appealing, and then I recall watching lions ripping the throats out of zebras on film, as I watched public television with my dad growing up. So, is ‘close-up’ exciting or frightening while on safari? It probably depends on the person and the outcome. Judge for yourself.

As the Land Rovers drove along, they caught the attention of two cheetah siblings. Cats are all known as curious creatures, and they say curiosity killed the cat, but that seems less likely to be the outcome for cheetahs curious about humans. As a photographer, Clow took full advantage of the rare experience and captured the encounter on film. 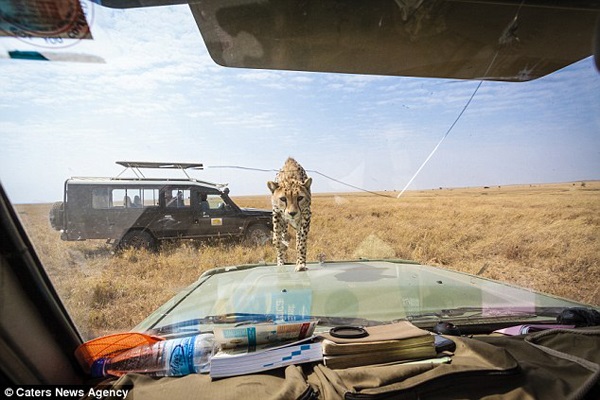 Upon discovering the Land Rovers, the Cheetah starts exploring by jumping up on the hood. 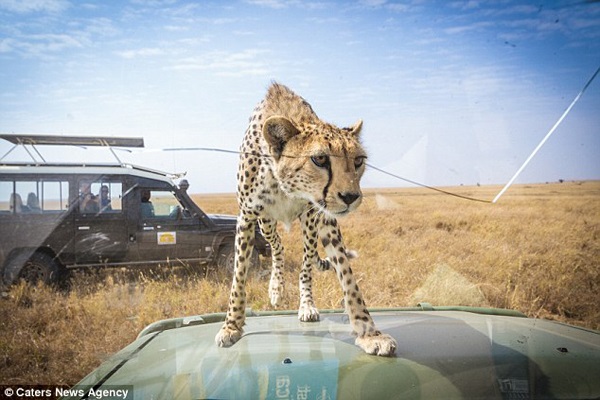 The cheetah makes its way along the hood of the vehicle 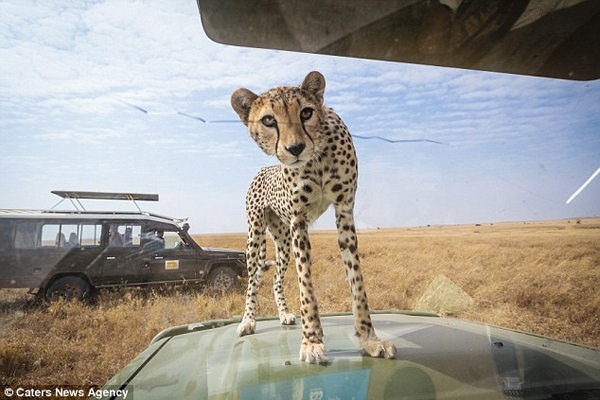 How often is a wild animal on the outside gawking at humans through the glass? 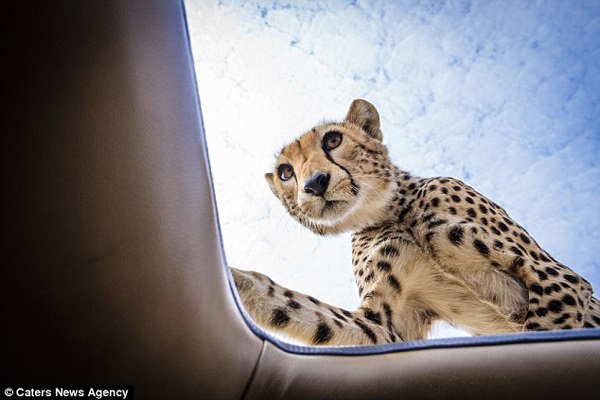 The cheetah discovers the open sunroof! 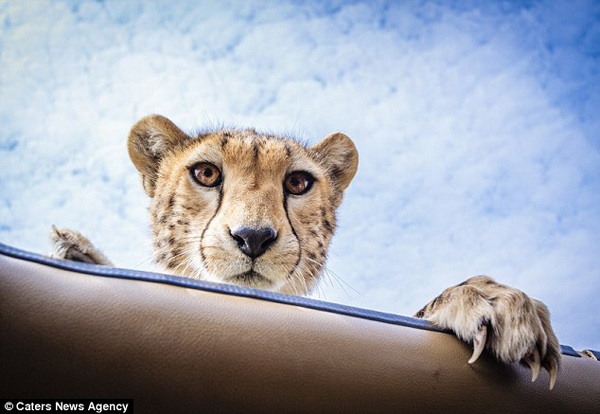 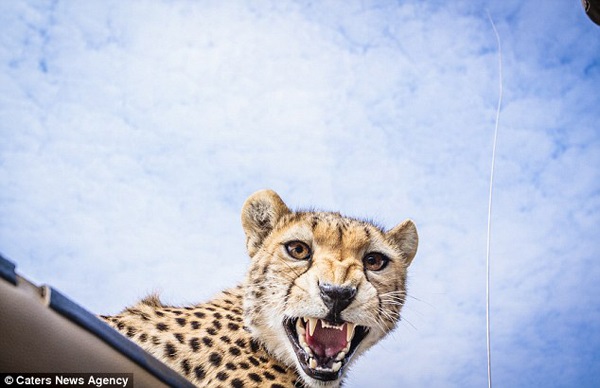 Does that look like a friendly face to you?  Should they close the roof? 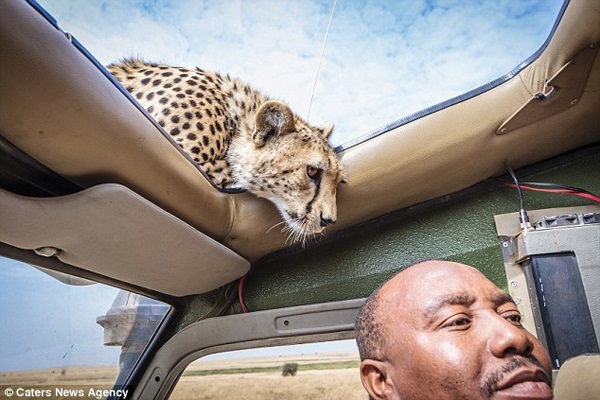 That looks like a curious baby cheetah. They are so adorable, it would be hard not to reach up and pet them. 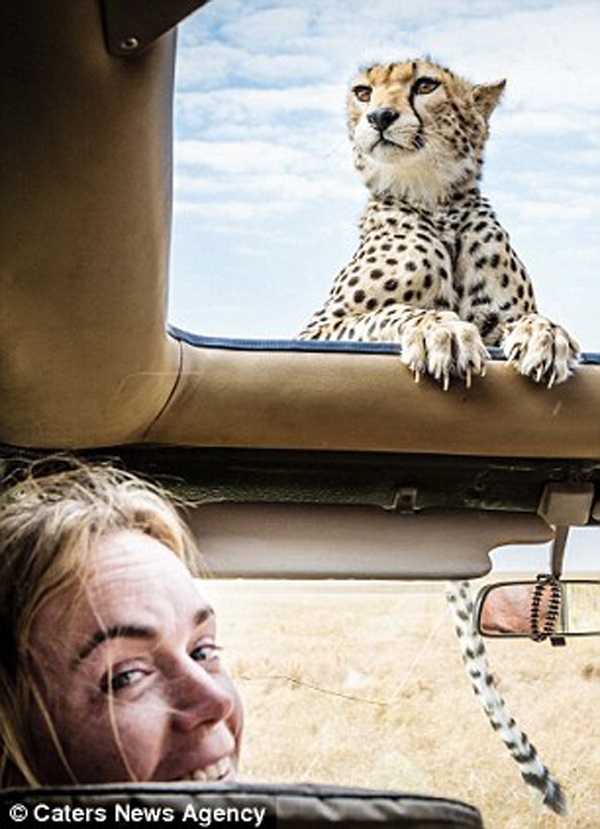 It seems the cheetah found a perch, and made itself comfortable. 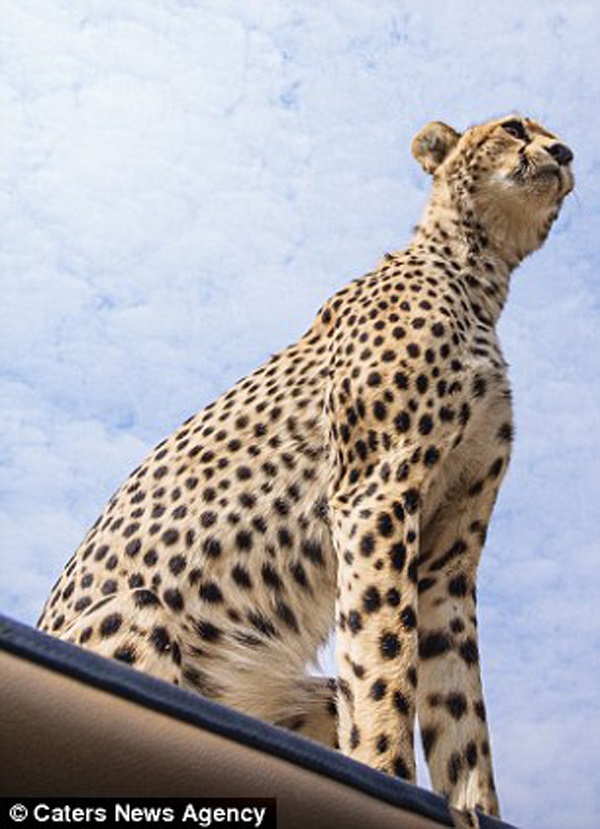 The curiosity for the humans inside has passed, and the cheetah looks out at the view from the top of the Land Rover.

Cheetahs are the only big cats that purr, though few humans ever get close enough to hear it. I wonder if this experience made these young cheetahs purr. The photographers stayed in the vehicle, as cheetahs are wild animals and their mother was likely close by. Cheetahs are beautiful creatures, and can run at speeds up to 70 miles per hour. They also tend to be very shy, so this photographer and others in her safari group were lucky to have this rare and thrilling experience. Lucky for us, they captured it on film to share it with us, and now we can share it with others.