It was just like any other day for off-duty New York cop John Vescio. He’d pulled up at a gas station to fill up his car. Suddenly, and seemingly out of nowhere, a car comes rushing onto the forecourt and smashes into everything…

John managed to get out of the way, but the impact started a small fire. And a small fire is not what you want at a gas station. The driver of the car had blacked out and wasn’t moving. John’s first instinct was to flee but his innate heroism kicked in and he fought to free the incapacitated 61 year-old driver.

And the clock was ticking – that place was about to blow at any second! 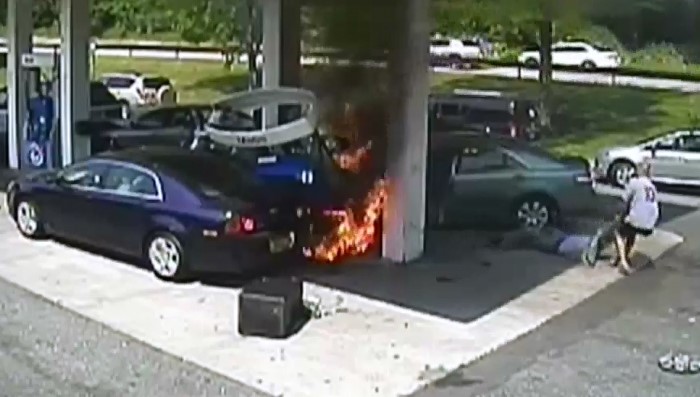 “I was standing there at the pump and the only thing I remember hearing was a speeding car; somebody that was entering into the gas station at a higher rate of speed than normal,” he said.

“You could see the way his legs were tucked under by the seat,” Vescio said. “His seatbelt was on. He was pretty much helpless.”

Watch the hero cop in action in this truly awesome video:

What a guy, eh? That’s an impressive level of bravery shown there by John. He’s since met up with the guy he saved who, according to John, was ‘very grateful’. Yeah, we’re not surprised!