[WARNING: The story you’re about to read may be upsetting for more sensitive readers.]

In Eastern Europe, beggars on the streets are a big issue. Homelessness across the world is a major problem, but in economically struggling countries such as Romania and Albania, the streets are filled with homeless people. Especially homeless women. Many can be seen with children too. Like the woman you can see below. Now, eagle-eyed locals and tourists have often noticed just how docile and well behaved the children are. They are almost always asleep.

But why? Anyone with kids will tell you that they are often very active and alert. So what’s happening? Well, something truly shocking indeed… 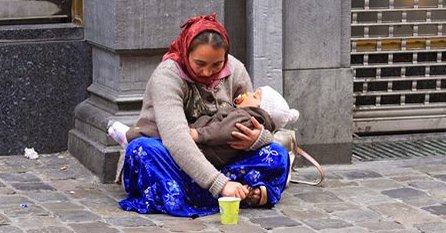 Gypsy beggars have made money for hundreds of years in Eastern Europe. And women earn more in sympathy donations than men. Women with children – even more. So it can be lucrative for mothers to have their children on the street with them. So how do many of these more unscrupulous women keep their kids asleep? Doping. Many will feed their children vodka…

Worse than that – many will even forcibly inject HEROIN into their children in order to keep them sedated and useful for begging. How horrible is that? It’s a shocking story and one we’re told that many national police services are looking to solve, but progress is slow.

What can we learn from this? It can be tempting to hand over money to the homeless, but for true change, your money is best placed given to a homeless charity.