Want to find out a hidden secret of nature that will help you to stop bleeding in the event of a cut or laceration? Of course you do. It’s not just handy to know for your own treatment or that of your family – just think if a pet became hurt. Okay, so you’re keen to hear. Well, we’ve got two words for you: Cayenne and pepper. That’s right, that little pot of spice you’ve got hidden away at the back of your cupboard. Neat, huh?

Right, so let’s get down to it and tell you how to use cayenne pepper to stop bleeding…

So you have a cut or gash that needs attention. Find the pepper. Take a little of the powder and apply it directly into the bleeding area (obviously if it’s a really serious cut – don’t. Just seek medical attention…). Sit back and wait. The bleeding should stop within about ten to fifteen seconds. Seriously.

If it’s a slightly larger wound (but again, not too big), you can take one teaspoon of the red pepper powder, that you’ve stirred into a glass of lukewarm water and drink it down real quick. Cayenne is a very strong styptic, which is to say that it’s a powerful substance that’s able to stop bleeding when applied to a wound, or ingested. Not only does it work to stop bleeding nice and quickly, it also disinfects the laceration, so you don’t need to worry about the cut becoming infected!

Cayenne pepper is thought by many to have tremendous healing effects for many other afflictions too. In fact, Dr. Richard Schulze, ND, MH, once said, “If you only master one herb in your life, master cayenne pepper. It’s more powerful than any other.” 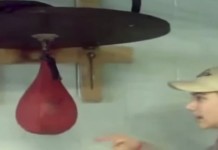