“Back to the Future II” Is my favourite part of the Back to the Future Trilogy. It had all the gadgets a kid could dream of. Hover boards, Flying cars and some super cool Nike Mag self lacing trainers. In 2011 Nike Inc. made a Limited Edition replica of the shoe which sold for 1000s and raised an awesome amount of money for The Michael J. Fox Foundation for Parkinson’s disease research. These replicas were lacking the main feature of the shoe, Power Laces.

In the movie, Marty and Doc set off to the year 2015, in order to fit in with the awesome futuristic clothing, Marty had a self adjusting jacket with built in dryer among many things and a pair of Nike Mag trainers that laced up on their own. Fascinating wasn’t it.

This Model Didn’t Work Over Water

Many Didn’t Notice That This Was A Jaws 19 Promo

But now we’re in for a real treat. Nike designer Tinker Hatfield says we will have a better version of Marty McFly’s Nike trainers with power laces sometime in 2015, Wooohoooo, super excited, although I’ll probably never be able to afford a pair. 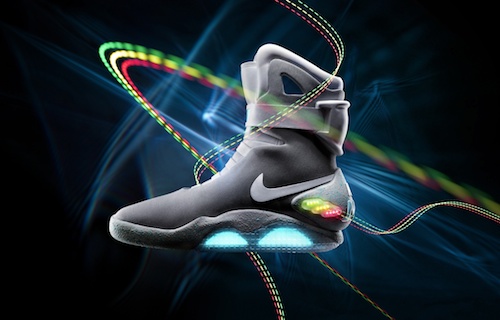 The only news that could be better than this would be…. We’re making a part 4 🙂