It’s finally happened… It’s WAR! The United States of America and their neighbors Canada have declared war against each other. Who’s going to win? Well, as it’s not an actual war, we’re not really sure. If it was a real fight – it’d be like a demented Rottweiler taking on a labradoodle puppy. What with all the nukes and tanks and manpower America boasts. But this is a different kind of war… Tug of war!

It’s a one on one battle. 31 Canadian Brigade Group (31 CBG) personnel were based for a time at Camp Atterbury in Indiana. Whilst there, they challenged some National Guard types to a tug of war. Canadian Master Corporal John Celestino of the Windsor Regiment is on the left, with the US National Guard soldier on the right.

This is a truly epic struggle! 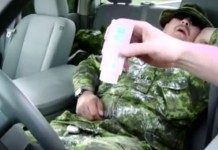 Here’s Why You Should Never Fall Asleep in the Military! 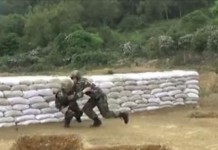