20 years ago, Joe Sellers was an aspiring computer programmer. One of his inspirations were the video game developers, Sierra, who published some of Sellers’ favorite titles: King’s Quest, Space Quest, Quest for Glory, and Conquests of the Longbow. One day, whilst attending his after-school computer programming club, he decided to write out a letter to Sierra, expressing his desire to follow the same path taken by the programmers at the company.

“I was so giddy when my teacher handed me this letter. I saw Sierra’s logo, shown every time you launched one of their games, like how film companies do it. I was so excited, opening the envelope right away. I could not believe that they actually wrote me back!”

In the letter, which is shown in the picture below, thanked Sellers for his interest, and wished him luck in his future endeavors. Unfortunately, Joe’s life didn’t go the way he planned it years earlier. He didn’t get a degree in Computer Science, and instead went into retail management, which was, in Sellers’ words, “dull and miserable.”

Last year, he decided to quit his job, and pursue his original dream.

“I decided to be the master of my own fate … I taught myself how to code. And guess who just published his first game for Apple and Google?” 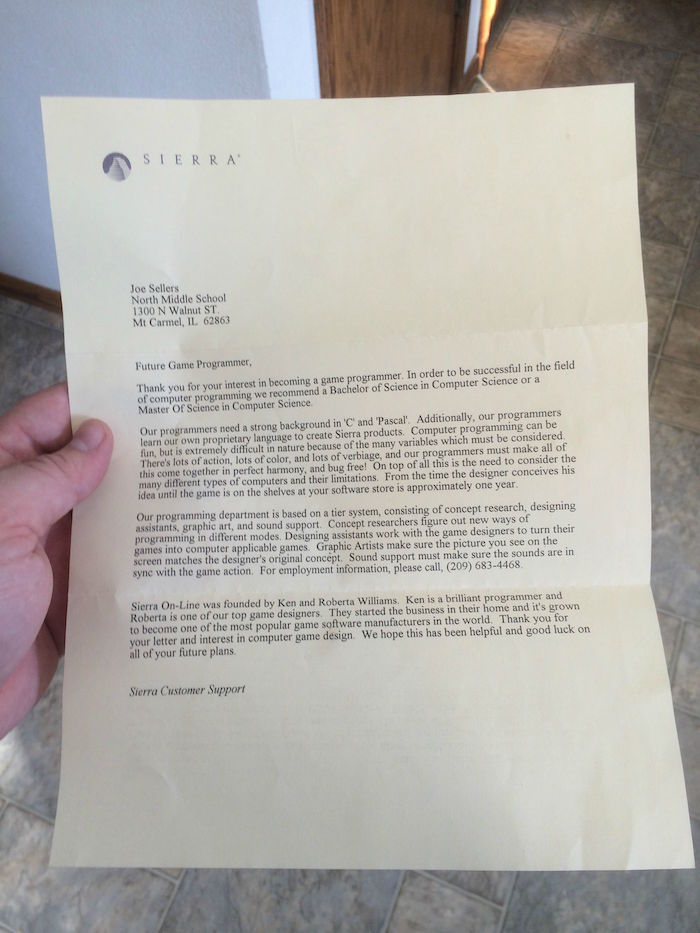 Discovering the letter reaffirmed to Joe that although his life briefly took a bad turn, he should follow his dream and become a computer programmer.

“I am so happy. I am working my dream job. With my first game released, I can now officially call myself an indie game developer.”