A photo has emerged of an emotional last embrace between a 77 year old dying woman and her beloved horse. Sheila Marsh had raised her 25 year old horse, Bronwen, from a foal to adulthood. They had a special bond though years of Sheila grooming, training and riding her. Last year, tragically, Sheila fell terminally ill with cancer. As her final hours approached, Sheila revealed that she had one last dying wish. Her daughter Tina told the press:

So the hospital in Wigan, Great Britain, organized for Bronwen to be transported from a local farm to the hospital grounds, and wheeled Sheila out to see her for the final time. Then something magnificent happened, as captured by this touching photograph. 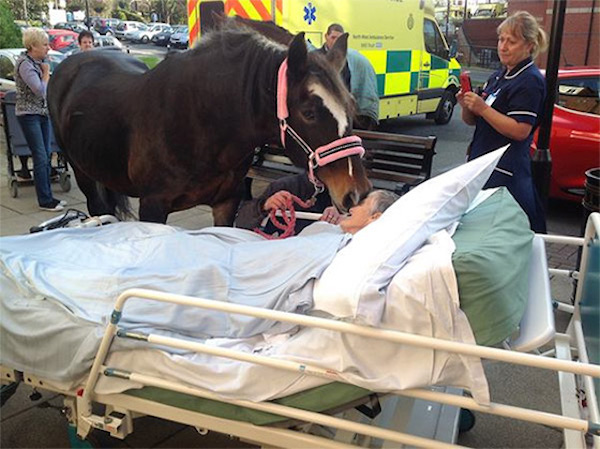 “Sheila gently called to Bronwen and the horse bent down tenderly and kissed her on the cheek as they said their last goodbyes,” said a nurse who was present at the touching reunion. Just a few hours later, Sheila passed away.