The HBO fantasy epic Game of Thrones has become a worldwide phenomenon with its mixture of swords, sorcery, intrigue, dragons and, of course, steamy adult content. With its cast of memorable characters, Game of Thrones has pulled in massive audiences who tune in every week to see who will live and who will – usually quite suddenly – die in the harsh world of Westeros.

The author of the books on which the TV show is based is George RR Martin and, as the show has progressed, fears have mounted that Martin may not complete his epic fantasy series before his time on earth runs out. Already there is speculation that the show will go its own way, leaving Martin’s books to follow different plotlines and his many characters to suffer wildly different fates. It’s never nice to speculate on when somebody might pass away; it’s pretty much a no-no to do it to a guy’s face. But that didn’t stop the reporter in this interview for German TV from doing just that.

The author’s reaction is totally THUG! Check it out: 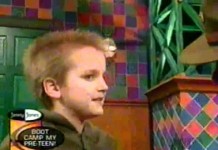