When Mukesh and Sumitra Ahirwar from Madhya Pradesh in central India noticed their son Mahendra’s head was starting to hang off to the side when he was six months old, they didn’t know what to think. By the time the child was three, he was no longer able to keep his head upright at all. Mahendra was suffering from a rare medical condition that makes his neck bend and his head hang down to the side. His spine is so weak that he is also unable to stand or walk, and he spends his days in a sitting position, looking at the world around him from upside down. 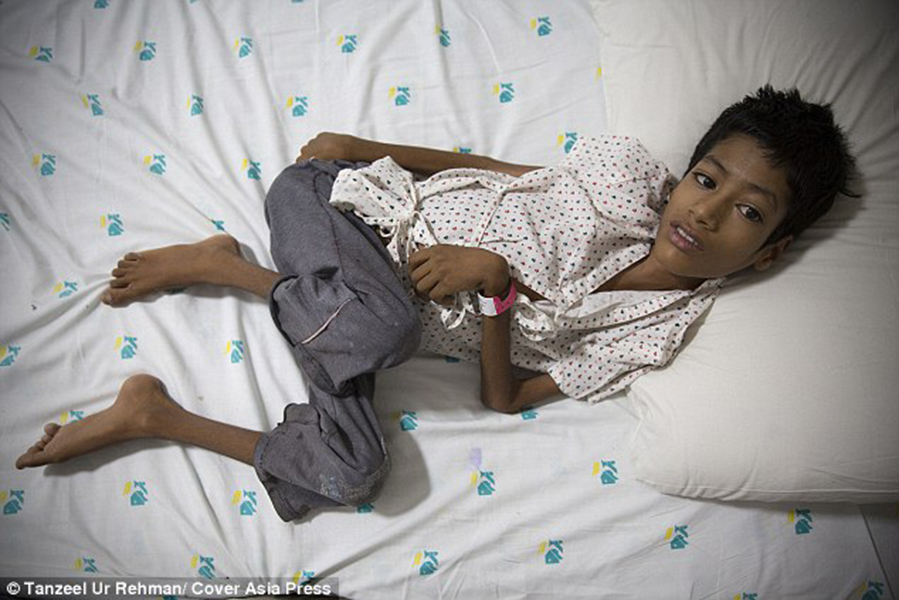 His worried parents are poor people from a poor part of India. Both laborers, they toil away for a meager $1 a day. Despite this, they managed to scrape together enough money to visit over fifty doctors in the eleven and a half years since they began to notice his condition, but alas, none of them were able to diagnose his condition. They had all but lost hope and had even said that they wished poor little Mahendra was dead rather than see him suffer any more. 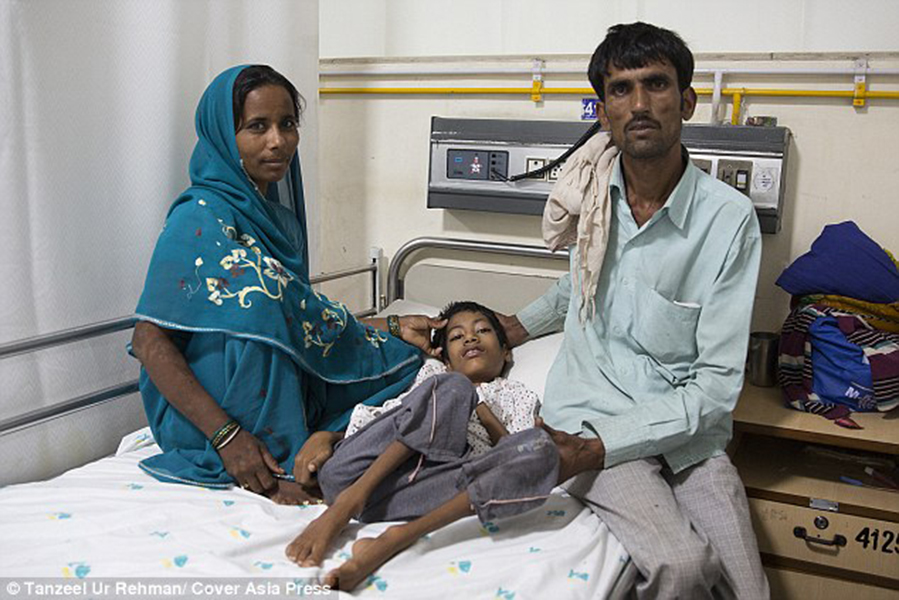 Finally, when all hope seemed lost, a ray of light shone through the darkness in the shape of Dr. Rajagopalan Krishnan of the Apollo Hospital in New Delhi. Dr. Krishnan is a senior spinal surgeon who formerly rose to the top of his field working for Great Britain’s National Health Service – known globally as one of the best health organizations in the world. Dr. Krishnan returned to India after spending 15 years in Britain, and used the skills he learned there to successfully diagnose the boy.

“I’ve done a preliminary review of the child’s clinical status and we now have a working diagnosis and once I have completed a few more studies, I am pretty sure that I can correct his disability by surgery in the not too distant future,” Dr. Krishnan told reporters. “At the very least, I am certain that I can improve his quality of life and he will be able to look at the world straight rather than upside down. I just feel sad that nothing was done for this boy for 12 years of his life.” 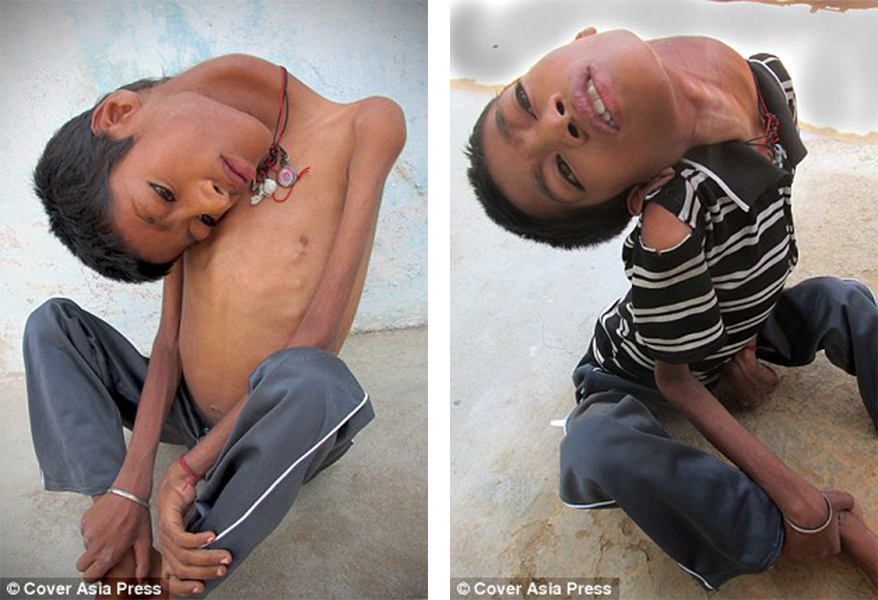 Dr. Krishnan and his team offered to perform the surgery for free, but there was a catch: The Ahirwars would have to pay for all hospital equipment used during the surgery. Mahendra’s parents simply did not have that kind of money.

And that’s where kind people thousands of miles away from a poverty-stricken area of central India stepped in. Mahendra’s plight was brought to the attention of the Internet, and it was not long before donations to pay for the equipment began flooding in. Julie Jones (pictured below), a care-worker from Liverpool, England set up a crowdfunding site, and it wasn’t long before her generous friends had raised over $15,000 to pay for the equipment. 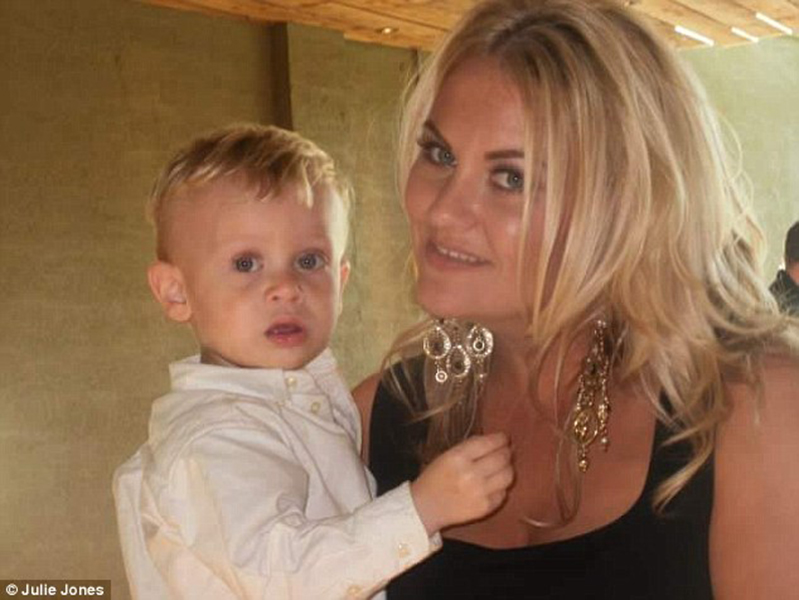 “He looks so sad,” says Julie. “His mum said he would be better off dead – it made me feel so emotional that his life is such a struggle. I set up a Crowdfunder page hoping to get a few hundred pounds for him but we’ve now passed £10,000. I am amazed and just so happy.” 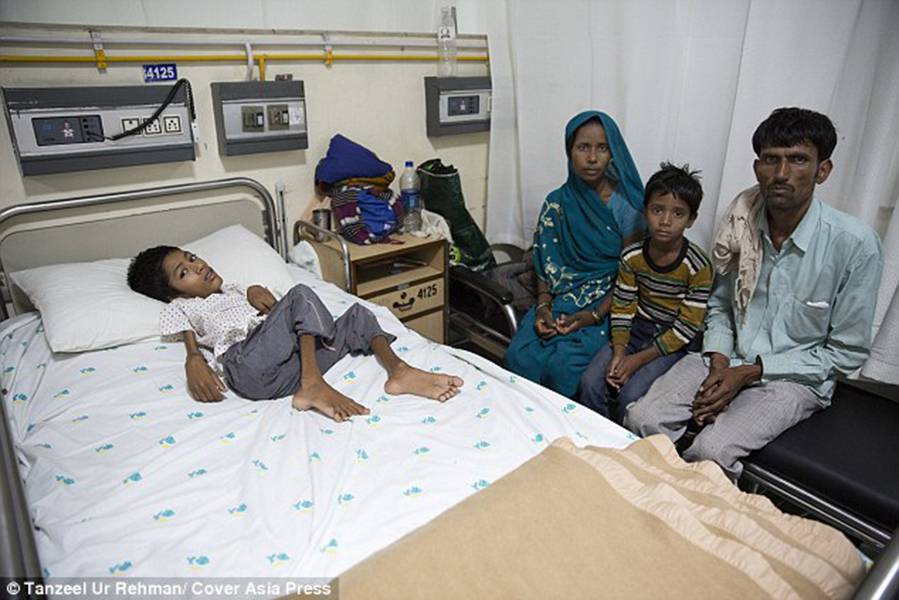 So it looks like little Mahendra will get his life-changing surgery after all. His father Mukesh couldn’t believe it when he heard the news. “I cannot believe that people have come forward to help my son,” he said. “I thank them for their donations. They are just like God to me. I never imagined people would donate money for his treatment, but now I am hoping that with these blessings of well-wishers my son will be cured. I want to see him with a straight head. I want to see him in school and live a normal life just like my other children. I never dreamed all of this would happen.” 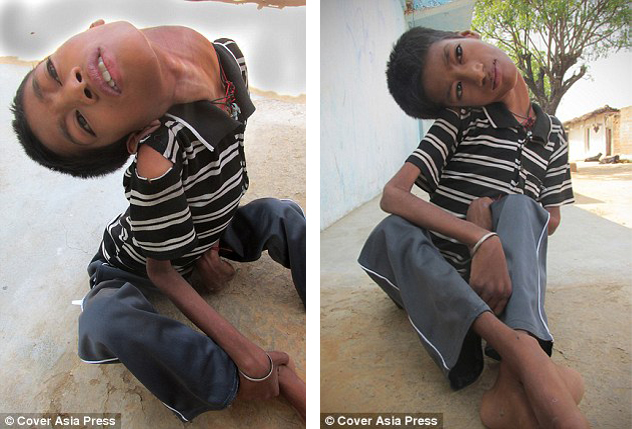 His parents remain at little Mahendra’s side as he undergoes further tests. Once they have been carried out, he will get the surgery he so desperately needs and finally, after twelve long years, be able to see the world the right way up. Good luck, Mahendra!

If you would like to donate to help pay for Mahendra’s treatment and aftercare, please visit his Crowdfunding Page.