Sacramento, California. It’s junior prom time at the Rio Americano school there and Albert Ochoa is hopeful of being able to convince his crush to go to the prom with him. He plans his invite, plucks up the courage and asks her. But… Disaster! She says no. He’s been rejected. He is, understandably, dejected. So he asks his back-up date. His Plan B…

That’s right. One of the world’s most famous women. The Kardashian sister who’s so hot right now. A model and star of social media and TV, there’s no way Jenner would say yes, is there? Well, she does. She accepts his invite and attends. Can you imagine how the girl who rejected Albert felt?!

“Imagine rejecting a prom date & the guy that asked you takes Kylie,” Ochoa’s pal Humberto wrote in a tweet afterwards. “Shout out to Albert Choa for that comeback!” This appearance of Kylie Jenner made not only Albert’s night, but the night of every other kid at Rio Americana. They were loving it! And here’s a little news clip about the story: 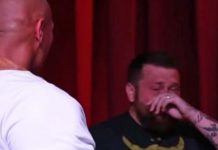 Dwayne ‘The Rock’ Johnson Photobombs This Grown Man And Makes Him CRY!