You’ve probably been a kilometre or higher up in the sky, haven’t you? It’s weird, isn’t it? However many times you’re up there in an airplane, helicopter, whatever – there’s always a slightly unnatural feeling about it. But if you thought that eating peanuts and watching an Eddie Murphy movie in the sky was strange – try doing what these guys do!

Andy Lewis and his merry crew of nutcases are, amongst other things, slackliners. Slacklining is bascially like tightrope walking except – and the name kind of gives it away – the line/rope isn’t as tight. There’s a little ‘give’ to it. Which should make walking 400ft between two hot air balloons a piece of cake, right?!

That’s certainly what Andy was hoping when he decided to head upwards to attempt the feat.

The reason we can see this insane attempt is because one of Andy’s crew shot the whole thing in high definition on a GoPro HD HERO3+® camera. 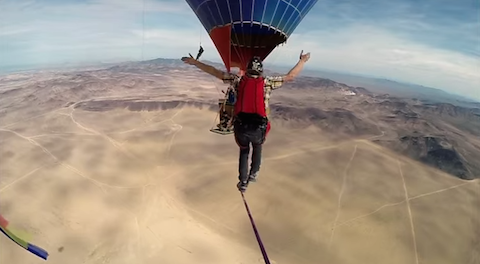 If you think the stills are pretty impressive, that’s nothing compared to the HD video. It’s like being up there in the clouds yourself. So, if you suffer from vertigo or a nervous disposition, you might not want to watch this clip! However, if you’re a bit of a thrill-seeker and you’re intrigued by just how talented/crazy Mr. Lewis is – here you go:

Not bad, huh? And quite a decent view from up there, we’re sure you agree! Why not share this post with any adrenaline junkies you know?