The Homeless Piano Man of Edmonton, who became an internet sensation six months ago, is back, and this time with a roof over his head! Ryan Arcand, whose piano playing went viral after being captured by Roslyn Polard and uploaded onto YouTube, was sleeping on the streets up until a month ago when, after a brief stint in jail, he moved into Ambrose Place, a supportive housing complex in Edmonton’s inner city. The complex, run by Niginan Housing Ventures, offers Ryan a room, a bed and, yes, a piano! “I got a roof over my head, I got a nice room, I get fed here. I’m not used to that,” he told CBC.

Despite now having a place to live, Ryan still battles his demons:

“He did come sober from the jail but he was itching to start drinking and he over indulged maybe the first couple of days but then we just kept gently reminding him you can bring your beer here.”

Letting Ryan bring his beer into the complex allows the staff to monitor how much he drinks. Cunningham reckons it’s already making a difference.

He is also attracting interest from the other residents. “Everybody comes down from upstairs and listens to him play and they cheer for him and clap,” said Cunningham. She also said that when visitors come they recognize Ryan from YouTube.

And now Ryan’s aim is to change his ways. “I want to straighten out my life that’s what I want to do.”

Here’s the video that made him famous: 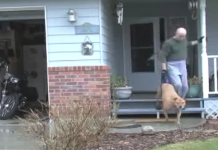 This Seems Like Any Man Walking His Dog. But Take A Closer Look … 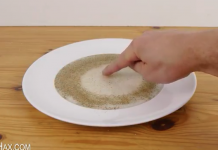 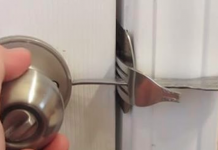