A lot of 12 year-old boys who find a cellphone would instantly think about whether or not there was a reward on offer and then start thinking about what they could spend that cash on. But not young Brit Josh Brown. Josh found an iPhone on a train home one day. He picked it up and gave it in to the lost property at the train station. But before he did, he received a phone call. It was from Michelle Hickinbottom. It was her daughter who’d left the phone behind.

Michelle was relieved and grateful so told Josh to leave the phone with his address so she could send him £20 (about $30). But instead of his address, Josh left this note: 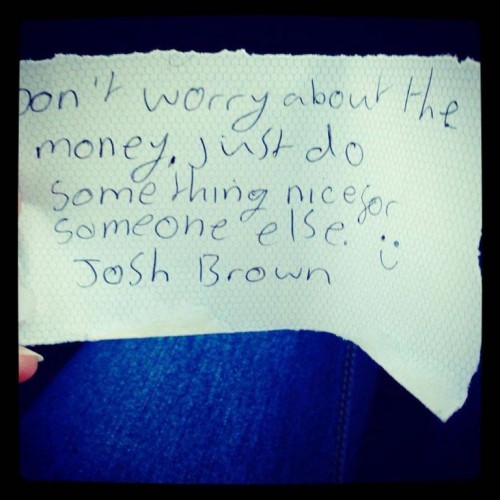 Michelle was taken aback. ‘I just wanted to find him as I thought it was a lovely thing to do. I said to him on the phone at the time it was really appreciated and to leave his address so I could send him £20 to thank him really. I was choked when I saw the letter. I was really overwhelmed. He will go far in life with an attitude like that. He seems a great lad.’

Josh’s mum is understandably proud of her boy, saying of his wonderful act:

‘We are very proud of him. But he just did the right thing. It was the only bit of paper I had in my handbag. It was the back of an envelope. It was all Josh’s idea. He said he wasn’t going to take any money off her and he’d just ask her to do something nice for someone else in future.’

Josh told everyone just why he wrote the note…

‘My dad always says “what goes around comes around” and if I lost my phone I would like to think someone would do the same to me. I didn’t think it was a particularly extraordinary thing to do. But I was gobsmacked when it appeared all over Facebook and Twitter.’