The Lindbergh Center Train Station in Atlanta, Georgia. A young man and an older couple wait patiently for their train, side by side. The couple are heading into the city center for a lazy day strolling the streets, doing a little shopping and maybe stopping somewhere for a cup of coffee and lunch. The young guy? He’s got a busier day ahead. He’s off for an interview for his first job.

As they wait, the lady notices the young man is doing up his tie. Or at least attempting to, anyway. Any guy out there who wears or has worn a tie will know that without being taught, they’re impossible to do up. They’re very fiddly and confusing unless you know the technique. And the kid was struggling.

But not for long. The elderly couple swooped in to help. The lady noticed and got her husband to help out. He taught the kid the way to tie it up and made sure he looked the part for his interview… It was a touching moment indeed. And someone even caught it on camera with this snap: 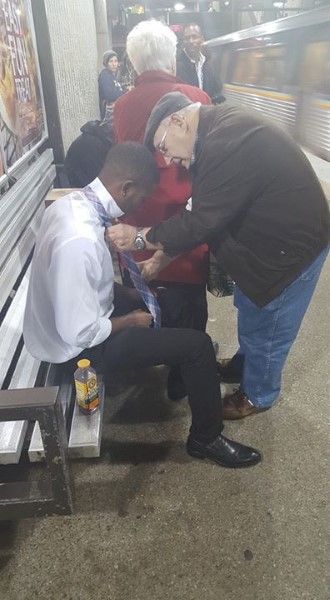 The person who took the photo uploaded it onto Facebook with the following message:

“The young guy sitting down was struggling with his tie. The woman in the red coat noticed, and asked ‘Do you know how to tie it properly?’ The young guy said ‘No ma’am.’ She taps her husband and says ‘Come to this side [her right side; he was standing on her left side] and teach this young man how to tie his tie.” The older gentleman moved without hesitation [almost a reflex response] and gave him a step-by-step tutorial; then – afterward – the elder gentleman watched the young gentleman repeat the steps and show him that he had it. I was some distance away (but close enough to hear the exchange), and got even closer to snap this candid photo of the tutorial in progress before hopping on the train. I LOVE THIS!”