Meat eaters beware. There is a vigilante roaming the streets in search of men and women eating meat ready to make them regret it. For some, vegetarianism is a lifestyle choice. For this man it’s far more than that. He’s taking matters into his own hands, pouncing on anyone eating a burger, some chicken etc. to prize it from their hands and throw it away. Whilst wearing a meat suit!

One man, Brad Burns, witnessed on of these attacks first hand in Veterans Memorial Park, Idaho. Luckily, he had his camera to hand and was able to capture the moment that the mysterious vigilante wrestled a burger from one of his victims. 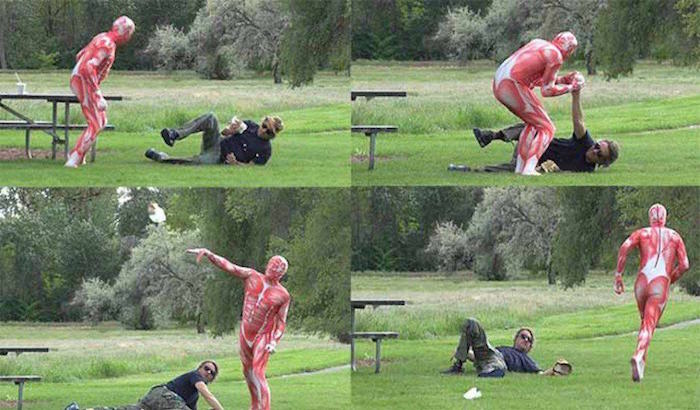 Commenting on the incident, Brad said:

“I saw the meat man run at the guy full force and knock him off the picnic table. My first instinct was to run because I thought the attacker might be a serial killer, but instead I decided to face my fear and capture the attack on my Samsung smartphone. The meat suit guy was yelling ‘meat is murder!’ over and over during the attack. He is obviously another whacko vegetarian. They’re all whacko. I plan to eat more meat now than ever because of what this freak did. He said he was wanted for train robbery and couldn’t go back to prison because it’s way too scary there. I felt so bad for him losing his hamburger and stuff that I didn’t dial police. Instead, I helped him to his feet and just watched him hobble away. In retrospect, I should have driven the guy to Wendy’s and bought him another hamburger.”

After the incident came to the attention of the media, other people admitted to also being attacked by the meat suit man, including this guy on Facebook.