When Connecticut based photographer Evan Schiller decided to take a trip to a Botswana game reserve to take some pictures of the wildlife, he couldn’t possibly have foreseen the incredible encounter he ended up documenting. While travelling through the reserve with his wife last November, Schiller came across a group of baboons who seemed agitated. Evan couldn’t see what was causing all of the fuss. Until… 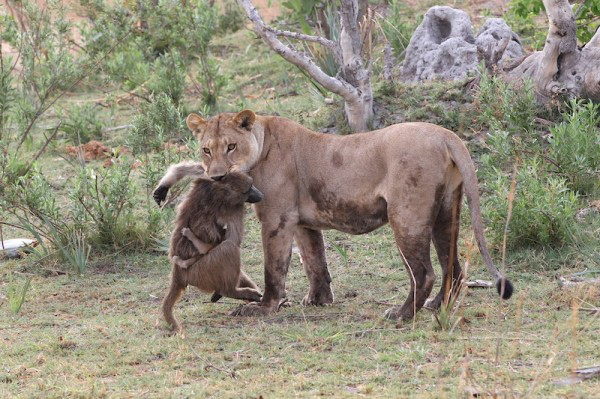 Two large lionesses appeared out of the bush and made straight for a group of three female baboons. Two of them managed to escape, but a third baboon wasn’t so lucky. Evan assumed he’d captured a sad- but necessary- part of life on the African plains and was about to move on, when suddenly he spotted a tiny shape emerge from its mother’s body. 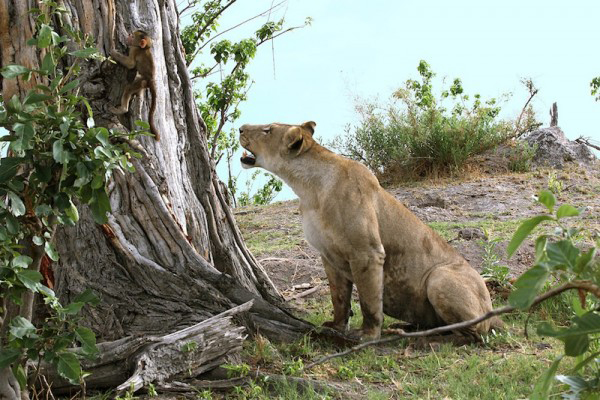 The baby baboon ran up a nearby tree, but the lioness followed it. Evan and his wife Lisa watched with bated breath, hoping the hungry lioness wouldn’t decide to eat the tiny ape. Unfortunately, the baby was too young and didn’t know how to climb properly so Evan and Lisa resigned themselves to the fact that the baby’s days were probably numbered. 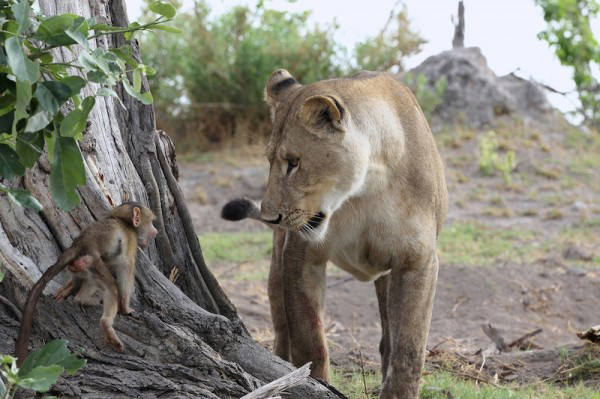 But then, something truly unexpected happened…. 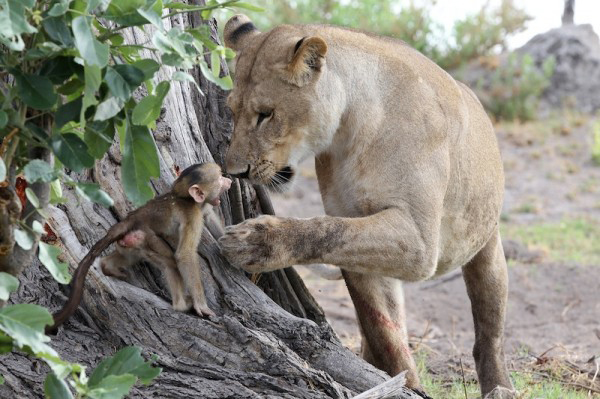 Instead of eating the adorable infant baboon, the lioness lightly tapped it with her paw, then gently picked it up in her massive jaws and carried it away from the other lionesses, setting it down in front of her. 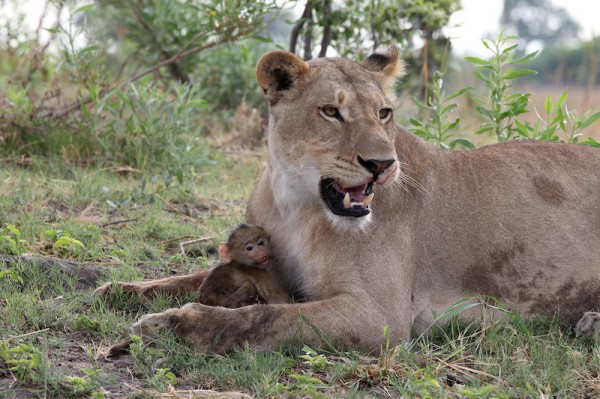 The baby cuddled up against its terrifying new mother. It then took some of the lionesses’ chest fur in its mouth and started to suckle, a truly heartbreaking sight. 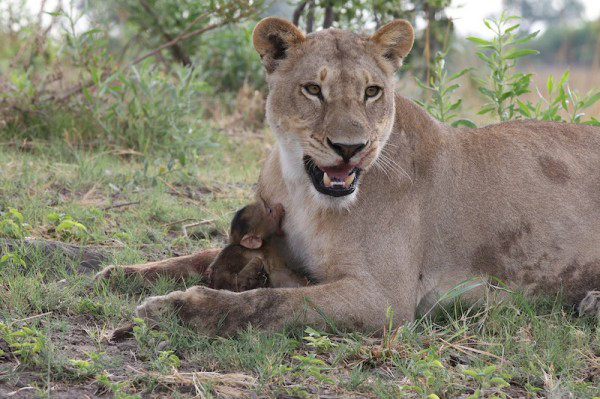 The strange pair sat together for some time. The baby even reached up to bat and play with his new friend’s chin fur, not realising that the lioness could crush him in her mighty jaws at a moment’s notice. As if realising this, the lioness then picked up the tiny baboon in her mouth again, leaving Evan and Lisa horrified. Was the baby going to be eaten after all? 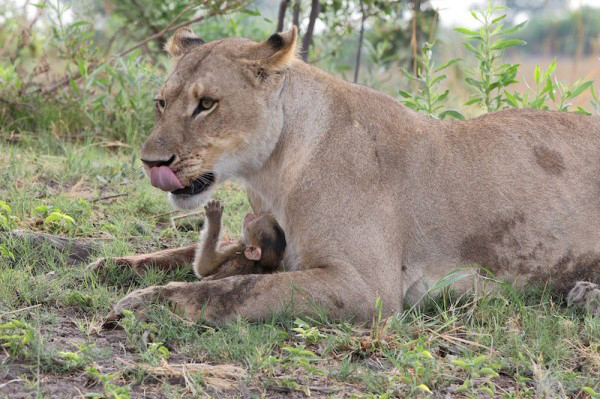 We’ll never know the answer to that, as- at that very moment- two young male lions arrived and distracted the lioness. The two lion brothers were in the mood for romance but the lionesses weren’t interested, to say the least! 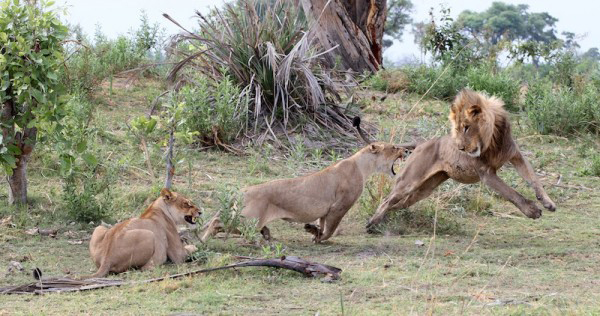 This distraction was just what the baboon’s father had been waiting for. He had been watching the scene tensely for some time, making several attempts to rescue the infant without any luck. While the lionesses were distracted by the males, he dashed down the tree, scooped up the baby and carried him to safety. 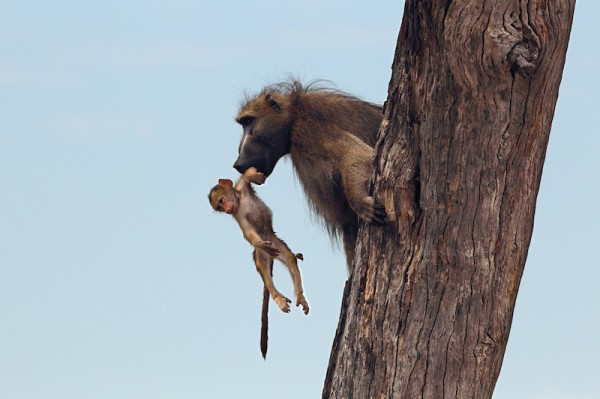 The infant appeared totally unharmed by his ordeal and Evan and Lisa left him cradling the baby in his arms as they drove away, relieved that the whole drama had ended happily. 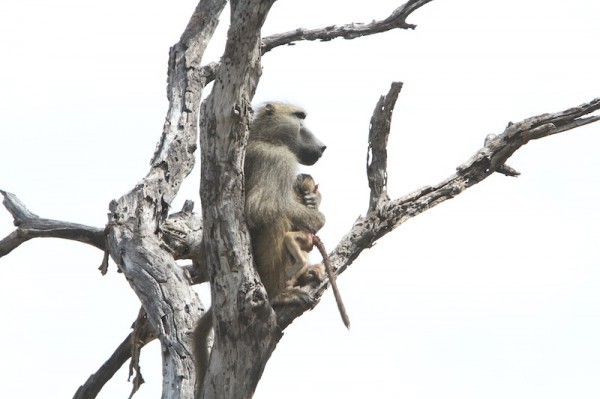 Lisa later wrote about the event on her blog, saying ‘No matter what, he remains an inspiration to me – and a reminder, that life is fragile and no matter how much I fight to control its outcome, I am at the mercy of the universe. All we can do is live in the moment.’

Share this story if you agree with Lisa’s views!
Checkout the video of a similar story but this time involving a leopard.