It’s official name is the Amphioctopus marginatus, but it’s also known as the coconut octopus or veined octopus. ‘Veined’ because of its appearance, ‘coconut’ because when marine biologists first discovered one, it was using coconuts for a weird little home. That’s what they do, you see. They like to get all cosy by hiding up inside something. Usually a shell. A shell they’ll have stolen. Hence their other name – ‘kleptopus’.

These cephalopods scurry around looking for the perfect mobile home to pinch and don’t care where it comes from. They were only discovered a few years ago, so the footage you’re about to see is pretty rare.

Nature really can be stranger than fiction, as the old saying (kind of) goes. Witness it in all its glory here: 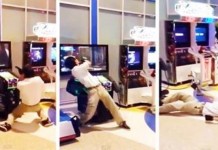 This Japanese Dude Takes His Arcade Games WAY Too Seriously!