In April 2007, one news story dominated the US airwaves: the discovery that Atlanta Falcons quarterback Michael Vick had been running an illegal dogfighting ring- nicknamed ‘Bad Newz Kennels’ from his multi million dollar mansion. When police arrived to search the property, they found almost fifty dogs, mainly pit bull terriers. Many of the dogs had scars, wounds and other signs of injury. Even more shocking was the revelation that Vick had personally ‘executed’ several dogs that he considered to be poor fighters.

But out of this tragic story came an incredibly positive tale of hope, redemption and determination. Despite the dogs’ chequered past, the judge in the case decided that every effort should be made to save and rehabilitate the surviving dogs. The results will shock you…in a good way!

This is the mansion where the criminal dog fights took place. 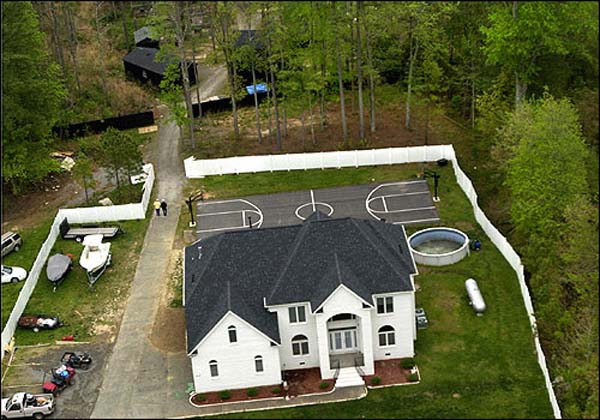 Vick claimed that dogfighting was ‘part of his world’ growing up and that he saw it as normal. The judge didn’t agree with his defense and sentenced him to 21 months in prison and a further two months under home arrest.

Out of the 49 dogs rescued from Vick’s mansion, two had to be put to sleep. But the other 47 had a brighter future ahead of them thanks to Judge Hudson. 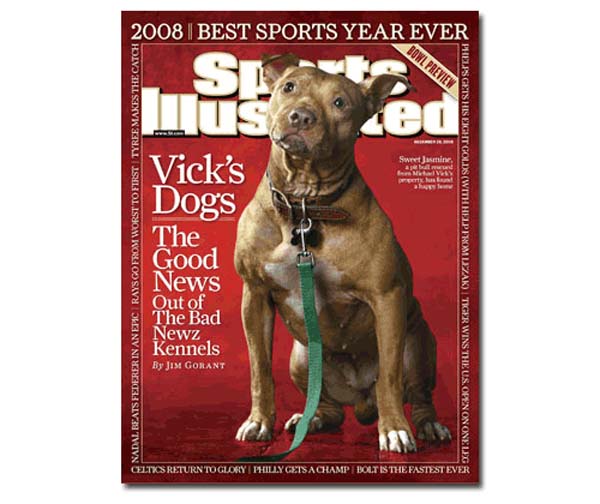 It would have been easy for Judge Henry Hudson to assume these pit bulls were too dangerous to be rehomed, but instead he decided to give them a chance.  Of the 47 remaining dogs, 22 were sent to an animal sanctuary at the Best Friends Animal Society in Utah and 25 were placed in foster care.

This is Oscar, one of the dogs that Best Friends rehomed. Isn’t he gorgeous? 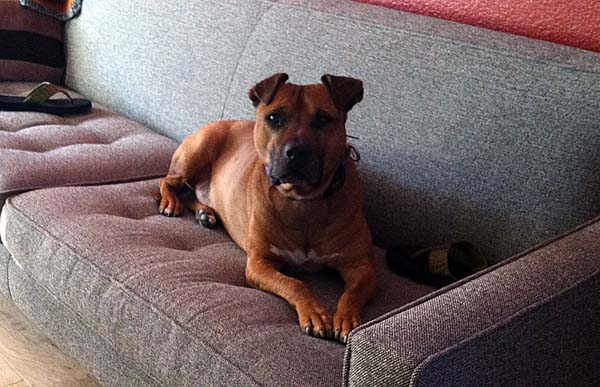 Oscar and some of the other dogs that were rescued from Michael Vick’s mansion were featured on Dogtown, a National Geographic Channel series set at the Best Friends Animal Sanctuary. We learned that Oscar’s new mom hadn’t intended to adopt a so-called ‘Vicktory’ dog, but she says it was one of the best decisions she ever made!

This is Mel who now lives with her new dad, Dallas radio show host Richard Hunter. 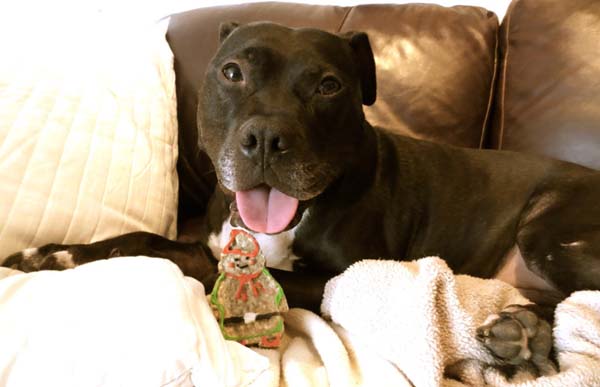 Richard reported on the dog fighting ring when the story first broke in 2007. He was devastated when he heard what the dogs had been through. When he heard that some of them were ready to be rehomed he immediately headed to the Best Friends sanctuary and fell in love with little Mel. She now lives with him at his home in Dallas. You’ll never meet a kinder, warmer- more cookie addicted dog!

Here’s Squeaker enjoying a walk on the beach! 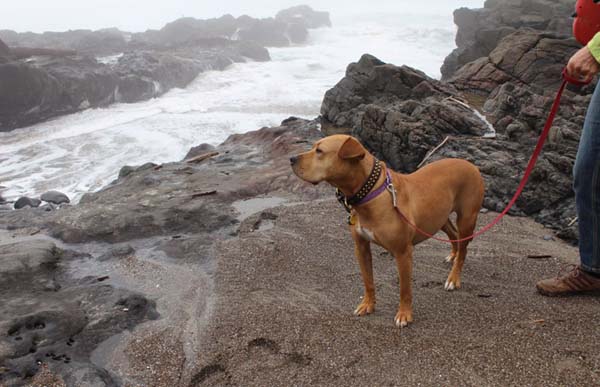 You’d never believe that Squeaker was once part of a savage and merciless dog fighting ring, especially as she now lives with six other doggy brothers and sisters and would never harm a hair on their heads- or anywhere else!

Oliver is overjoyed with his new home. 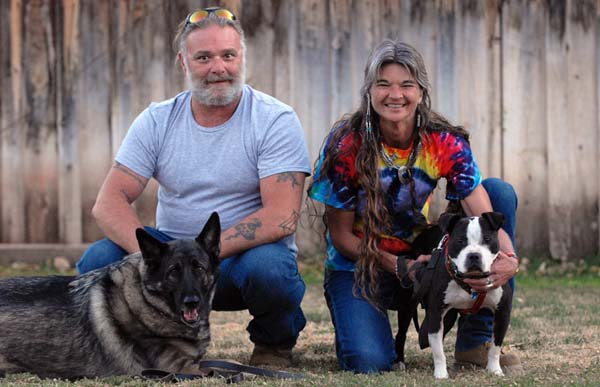 In his initial evaluation, the staff at Best Friends said that Oliver was very fearful of people: no wonder given what he’d been through. Some of the dogs at Michael Vick’s hellish mansion were used as bait to train other dogs to fight. Now he loves his doggy brother and always jumps on his new mom Erika’s lap for a kiss and a cuddle. 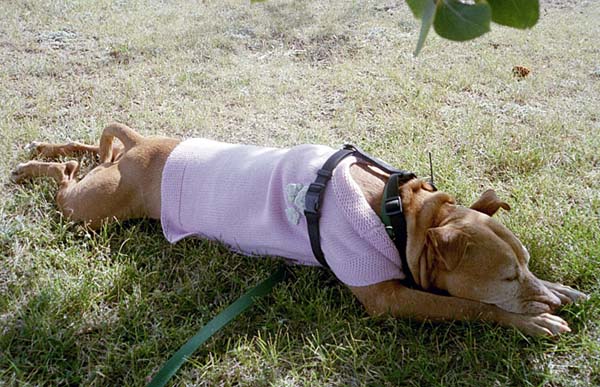 Little Red spent five years as a so called ‘bait dog’, being mauled almost every day. Understandably, she was left severely traumatized and it took her a long time to recover, but she’s now been rehomed and couldn’t be happier.

Gorgeous Dan even finds time for a spot of babysitting! 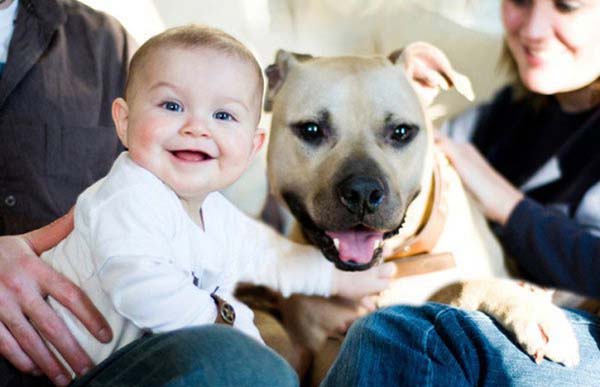 Anyone who says that pitbulls are inherently dangerous should be made to meet Dan! Despite the horrors he went through, he’s sweet natured and wouldn’t hurt a fly. He even helps take care of his new owners’ baby daughter who arrived in 2010. 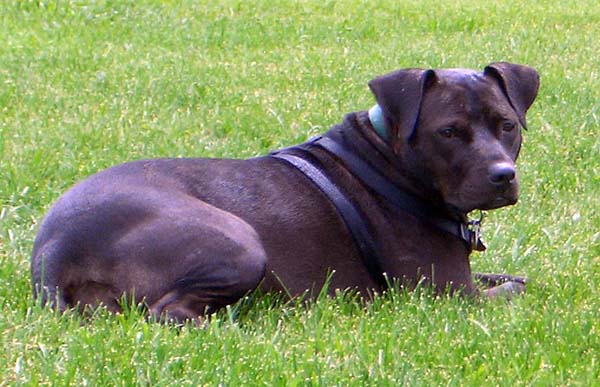 You might think that a reformed fighting dog should be kept away from other animals, but not Halle. Thanks to Best Friends’ expert rehabilitation programme, she now has two doggy brothers and loves to frolic and play fight with them, but never bites or injures members of her furry family.

Georgia spent her final six years of her life in a loving forever home. 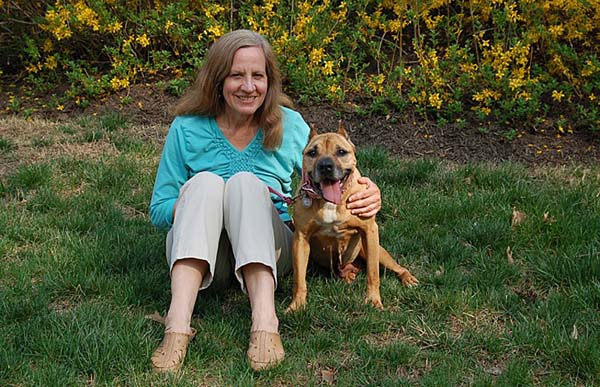 Lovely Georgia sadly passed away in 2013, six years after being rehomed. New mom Amy said she had no idea how Georgia would adapt to domestic life, but that she was blown away by how well Georgia fitted in with the family. RIP.

Brave Cherry is now a mentor to other abused and frightened dogs. 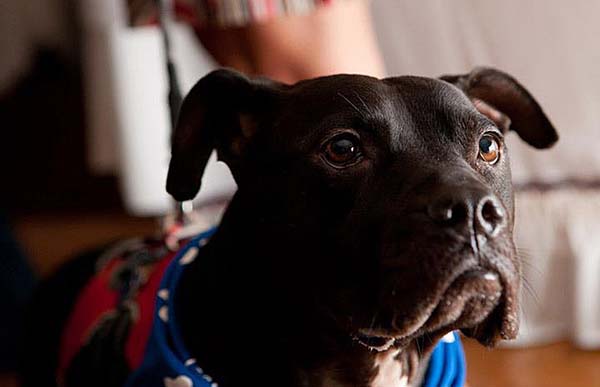 Thanks to Best Friends and his loving new owners, Cherry is now fully recovered from his ordeal and now helps other abused animals from similar backgrounds to rehabilitate. What a sweetie!

All images via bestfriends.org. If you think that these dogs are truly inspirational, why not share this post with friends and also make a donation on the Best Friends website to help support the animal charity’s amazing work?